When is a Root Canal necessary?

When the nerve of a tooth is compromised either by decay or trauma it may be necessary to remove the nerve(s) from the tooth in a root canal procedure. The compromised nerve may manifest as a “toothache” and in some cases is only determined by a periapical x-ray showing a radiolucency (dark area) in the bone at the tip of the root. Pain is not always present with an infected tooth.

What is a Root Canal procedure?

The root canal procedure removes the dying or dead (necrotic) nerve tissue from the root(s) of the tooth, disinfects the root canal(s) and then seals them to prevent bacteria from traveling through the canal(s) and into the bone.

After the tooth is treated with a root canal, it may be tender for a few days to a couple of weeks while the affected/infected area heals. When a patient presents with acute pain in a tooth requiring a root canal, it may be necessary to place the patient on an antibiotic in order to get the infection controlled prior to root canal treatment. Root canaling a tooth with an uncontrolled infection may make it difficult to anesthetize the tooth (get the tooth numb) due to the acidic environment created by the infection which neutralizes anesthetic.

After a root canal is completed, the tooth may be missing a lot of structure due to removal of extensive decay, the tooth may become brittle (since it is not being nourished by the blood-vessels that were in the canals) and the tooth usually becomes dark in color. It is therefore recommended that a crown be placed on a root canaled tooth in a timely manner to prevent fracture, to replace missing tooth structure and to conceal the dark shade of the tooth underneath.

Most root canal procedures produce very little, if any, pain. When a patient presents with an infected tooth, usually Dr. Ney will place the patient on an antibiotic to control the infection before initiating root canal treatment. Starting a root canal while a tooth is infected and has not been treated with an antibiotic may cause pain since an infection produces an acidic environment which tends to neutralize anesthetic, making it much less effective. An acutely painful tooth also lowers the firing threshold of pain receptors which is another reason to control the infection prior to starting treatment. After a root canal has been completed the tooth may be tender for a few days and may even be tender for a week or more as everything settles down. It is important to remember to chew on the side opposite the root canaled tooth until the tenderness has gone away.

How Long Does A Root Canal Take?

Most root canals can be completed in one visit. Molar root canal procedures require around 1 to 1 ½ hours to complete. Pre-molars and anterior (front) teeth usually require significantly less time. During a root canal procedure, if the patient has difficulty keeping his or her mouth open, a bite block can be placed in the mouth, allowing the patient to close comfortably on it and rest the jaw.

Root canals are considered to be around 95% successful when completed properly. Root canals are complicated systems within a tooth. While the tooth may have 3 or 4 main nerves which enter the canals, there are a number of teeth that may have more nerves and more canals, and even accessory canals entering along the sides of the roots. Most of the time, these accessory canals are insignificant and are disinfected and sealed off during the procedure.

Failure of a root canal may be caused by contamination of the canals without adequate disinfection during the procedure. In some cases a canal may not be easily located, requiring further treatment by a specialist if the tooth does not heal. If bacteria remains in the canals, it can proliferate over time causing re-infection and failure.

When performing a root canal, many fine instruments and files are used to shape and clean the walls of the canals. Occasionally, one of these instruments may separate in a canal, leading to an increased chance of failure. If this occurs, many times the instrument may be left in the canal if it is not retrievable or able to be by-passed. Depending on the location of the separated file, it usually will not cause a problem. These files are made of nickel-titanium and are bio-inert. They are similar to the types of material used in hip or knee replacements.

Canals are disinfected using the effective antimicrobial solutions of sodium hypochlorite and Q-mix. Sodium hypochlorite is a diluted bleach solution and Q-mix contains chlorhexidine (antibiotic), EDTA (which helps to dissolve the smear layer along the canal walls allowing for sealing of lateral or accessory canals), and a surfactant which reduces surface tension to allow for better canal filling. Q-mix also kills the bacteria Enterococcus faecalis which is resistant to sodium hypochlorite. These antimicrobial solutions are dried out of the canals prior to filling and sealing the canals. Canals are sealed after disinfection with a material called gutta percha, which is nothing more than a space filler, and a biocompatible sealing material which helps to flow into and seal the lateral canals and apical (tip of the root) seal.

Are there alternatives to a root canal?

Why root canal a tooth instead of extracting the tooth and replacing it with an implant or a bridge? It is always better to have your natural tooth in your mouth. Even after root canal treatment is completed and the nerves have been removed from the tooth, there is still a ligament that holds the tooth to the bone, called the periodontal ligament. This ligament has nerve fibers that allow for the sensation of pressure when chewing on the tooth and allows the tooth some physiologic movement. When the tooth is extracted, this proprioception is gone. An implant does not have a ligament but is fused directly to the bone. While it may provide a nice solution to the loss of a tooth, it does not provide those important physiologic feedback mechanisms that the natural tooth provides. Removing a tooth and placing a bridge requires crown-prepping (removing a few millimeters of tooth structure) the teeth on either side of the space, which may mean cutting virgin teeth. 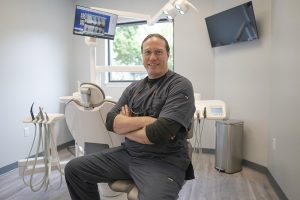